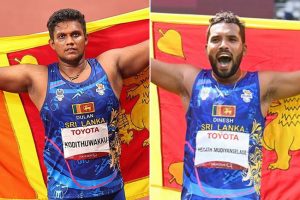 The Cabinet of Ministers has given the nod to award cash prizes to the two Sri Lankan athletes who clinched a Gold and a Bronze at the 2020 Tokyo Paralympic Games.

The proposal was tabled by the Minister of Sports and Youth Namal Rajapaksa, the Department of Government Information said in a press release.

Dinesh Priyantha Herath, who set a new world record in the Men’s Javelin Throw – F46 – event with a distance of 67.79 meters, made history by winning Sri Lanka’s first ever gold medal at the Paralympic Games.

Meanwhile, Samitha Dulan Kodituwakku claimed a bronze medal in the Men’s Javelin Throw – F46 – event. He took the third place with a personal best of 65.61 meters.

The Cabinet has also given the approval to award cash prizes to the two coaches of the two medalists, according to the Government Information Department.

The National Sports Council, established in accordance with the provisions of the Sports Act No. 25 of 1973, has recommended the criteria for awarding the cash prizes and the amount of the prize money given for the recognized international sports achievements. – ada derana