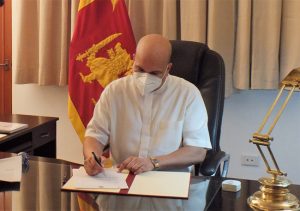 The Indian High Commission in Colombo rejected rumors surrounding the credentials of the new High Commissioner-designate of Sri Lanka to India Milinda Moragoda.

On August 30, Moragoda assumed his post as the High Commissioner-designate of Sri Lanka to India nearly a year after his appointment.

Issuing a statement, a spokesperson of the High Commission clarified today (September 06) that there is no truth in such reports.