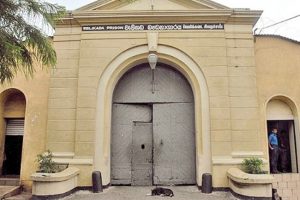 Prime Minister Mahinda Rajapaksa has directed the Prisons Department and the Urban Development Authority (UDA) to pay special attention to the security and welfare of children of female inmates when shifting the Welikada Prison Complex to Millewa.

His directives came at a virtual meeting held yesterday (Sep. 06) discuss relocation of the Welikada Prison Complex to a 200-acre land in Millewa, Horana and the progress of the project, the Prime Minister’s Office said in a statement.

The Commissioner General of Prisons Thushara Upuldeniya has told PM Rajapaksa that a day-care centre will be established for these children once the prison complex is moved to Millewa.

The Rs. 30 billion relocation project is expected to be completed by 2024, the officials of the Prison Department and the UDA informed the Prime Minister during the meeting.

Reportedly, plans are afoot by the UDA to launch a hotel project at the Chapel Ward and the Welikada Prison headquarters building after shifting the prison complex.

After the relocation is completed, approximately 35 acres of the 40-acre premises of the Welikada Prison are expected to be set aside for other investments.

PM Rajapaksa has instructed the UDA officials to invite other investors, if any, in addition to those who have already expressed their interest.

According to the Prisons Commissioner General, the Magazine Prison will be shifted to the new premises in Horana. The other prisons along with the Welikada gallows are planned to be relocated subsequently. – ada derana