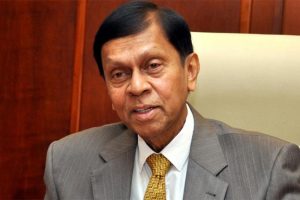 State Minister of Finance, Capital Markets and State Enterprise Reforms Ajith Nivard Cabraal is set to submit the letter of resignation from his position as a Member of Parliament on Monday (Sep. 13), Ada Derana learns.

Reportedly, the resignation letter is expected to be handed over to the Secretary General of Parliament.

Further, Cabraal is also tipped to be reappointed as the governor of Central Bank of Sri Lanka by mid next week.

On Friday (Sep. 10), the current governor of the Central Bank, Professor W. D. Lakshman announced his intention to retire from his position on September 14.

“I have not taken any decisions against my conscience,” Prof. Lakshman said via a virtual press briefing, adding that he had originally planned to retire when he turned 80 next month.

His announcement came at a time when speculations have been rife as of lately that Cabraal, who previously served as the Central Bank governor, is tipped to be reappointed to the position following the retirement of Prof. Lakshman.

However, speaking to media this morning (Sep. 11), Cabraal confirmed that he accepted the invitation extended by the President to take up the post of Central Bank governor.

“In order to do so, I will have to resign from the parliament,” he added.

Cabraal was appointed as the Central Bank governor in July, 2006. Four years later, he was given an extension until 2016. However, following the presidential election in 2015, Cabraal stepped down from the position. – ada derana