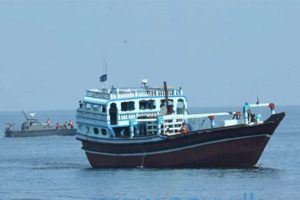 A foreign multiday fishing vessel carrying a consignment of heroin has been intercepted in Sri Lankan waters, the spokesperson for the police said Saturday.

The interception was made last night (Sep. 10) during a joint operation carried out by the Navy and the Batticaloa police division in the seas south of Batticaloa.

According to SPP Nihal Thalduwa, nine crew members aboard the vessel in question were also apprehended by authorities.

The seized vessel and the arrestees are currently being brought ashore by the naval personnel, the police spokesman said further.

He added that the general public can tip off law enforcement authorities regarding narcotics smuggling attempts via the hotline 1997. – ada derana