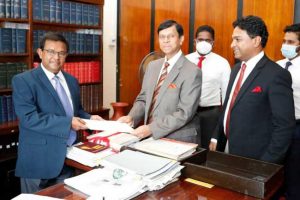 State Minister of Finance Ajith Nivard Cabraal has handed over his letter of resignation to the Secretary-General of the Sri Lanka Parliament.

Cabraal is also tipped to be reappointed as the governor of the Central Bank of Sri Lanka by mid-week.

On Friday (September 10), the current governor of the Central Bank, Professor W. D. Lakshman announced his intention to retire from his position as of September 14. – ada derana