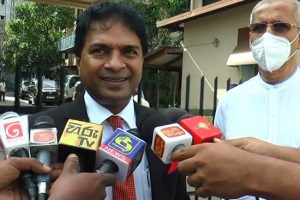 The Sri Lanka Podujana Peramuna (SLPP) has submitted the name of Jayantha Ketagoda to the Elections Commission to be appointed as a National List MP, filling the vacancy created by the resignation of State Minister Ajith Nivard Cabraal.

SLPP General Secretary MP Sagara Kariyawasam had handed over the relevant document to the commission this afternoon (13).

Earlier today, Mr. Cabraal had handed over his letter of resignation to the Secretary-General of the Sri Lanka Parliament.

Accordingly, the Secretary General of Parliament has taken steps to inform the Chairman of the Election Commission in writing that a vacancy has been created given his resignation.

Kariyawasam said the party decided to name former MP Jayantha Ketagoda to the vacant National List MP seat and that his name has been officially handed over to the Elections Commission.

Ajith Nivard Cabraal, who served as the State Minister of Money & Capital Market and State Enterprise Reforms of the 9th Parliament, is expected to be reappointed as the next Governor of the Central Bank of Sri Lanka this week.

On Friday (September 10), the incumbent Governor of the Central Bank, Professor W. D. Lakshman announced his intention to retire from his position with effect from September 14. – ada derana