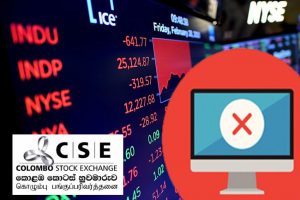 Several websites were reported to have crashed last night (September 13).

However, the relevant issues have been rectified as of now, Minister of Mass Media and Information Dullas Alahapperuma said today (September 14).

“It was reported yesterday that such a situation had arisen during the course of the stock market. As far as we know, there are no such problems at the present. Only two websites have been affected.”

The daily trading of the Colombo Stock Exchange was disrupted last evening owing to this.

The Colombo Stock Exchange (CSE) said in a statement that an error in the Data Center had caused the crash. – ada derana