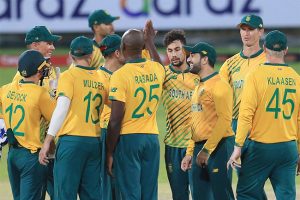 South Africa delivered a commanding performance in the third T20I against Sri Lanka in Colombo to complete a 3-0 series whitewash.

After winning the toss, Sri Lanka opted to bat first in the third T20I against South Africa. Given the series was already wrapped up, both teams decided to ring in changes for the final game. The hosts made three changes to the team that lost the second T20I by nine wickets with Dinesh Chandimal, Charith Asalanka and Praveen Jayawickrama making way for Avishka Fernando, Kamindu Mendis and Lahiru Madushanka. The Proteas decided to go with an extra all-rounder, bring in Wiaan Mulder to replace Anrich Nortje.

After getting off to a quick start, three wickets in three consecutive overs derailed Sri Lanka’s innings in the Powerplay. Kagiso Rabada, who has not been in the best of form lately, accounted for the wickets of Avishka Fernando and Bhanuka Rajapaksa while Quinton de Kock completed a smart stumping off Bjorn Fortuin to dismiss Dhananjaya de Silva.

Kusal Perera, who made his return from injury in the previous game, continued to accumulate runs but found little support at the other end. Mendis’ 16-ball stay that fetched only 10 runs came to an end when Aiden Markram caught the leading edge off his bat that went straight to covers.

Skipper Keshav Maharaj brought an end to Perera’s resistance when he trapped the southpaw bowling around the wicket as Sri Lanka lost half their side by the 13th over with just 80 runs on board.

Wanindu Hasaranga was the next batter to make the long walk back after he failed to clear the Maharaj at covers with the inside-out lofted shot. They sunk further when Lahiru Madushanka was run-out while attempting a quick single.

Skipper Dasun Shanaka perished in the bid to accelerate the scoring at the death. Thankfully for Sri Lanka, a late flourish from Chamika Karunaratne took Sri Lanka to 120/8 at the end of 20 overs.

In reply, the South African openers — Quinton de Kock and Reeza Hendricks raced off the block in the run chase. The Sri Lankan bowlers tried their best to disturb the rhythm, but simply could not get the same perches off the wicket as their South African counterparts.

After 8 overs, the Proteas were cruising in the run chase, with their score at 64/0, requiring 57 runs off only 72 deliveries. Hendricks and de Kock were both looking comfortable at the crease with scores of 29* each.

The pair further put their foot down, with both of them registering solid half-centuries as a 3-0 whitewash remained a mere formality. They achieved the target with 10 wickets in hand and in only 14.4 overs, in a performance which will give them a lot of confidence ahead of the 2021 ICC Men’s T20 World Cup.