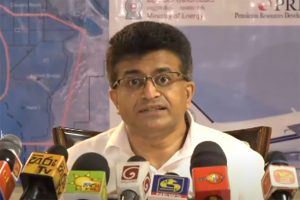 Minister of Energy Udaya Gammanpila says that Sri Lanka has enough petroleum resources in Mannar to sort out the country’s USD 47 billion debt many times over.

Addressing an official media briefing to announce the first airborne survey in Sri Lanka to map oil and gas resources at the Mannar Basin, the minister said the country is set to earn valuable foreign exchange by selling the data obtained from the survey.

The Ministry of Energy in collaboration with UK-based geographical survey company Bell Geospace recently launched an airborne gravity, gravity gradiometry and magnetic survey to detect petroleum resources in the shallow waters of the Mannar Basin.

The survey is said to be first of its kind conducted in Sri Lanka.

“We had only 20 exploration blocks in our exploration map for a long time. Investors had to spend a lot of money to complete exploration of a block. This had an adverse impact on attraction of investors to oil exploration in Sri Lanka. Therefore, we decided to amalgamate those 20 blocks and redivide into 873 smaller blocks.”

The Bell Geospace, a world-renowned geological surveying company, is collecting relevant information for Sri Lanka by conducting a gravity and magnetic survey, he added.

The energy minister pointed out that the Sri Lankan government will not have to spend any money on this project, as the entire cost of the survey is borne by the company.

According to him, the survey is being conducted by the company on a profit share basis with the government.

Minister Gammanpila outlined the estimation of the oil and gas reserves the Mannar Basin may hold, putting it at around USD 260 billion, enough to pay Sri Lanka’s external debt many times over.

“We have identified 2 billion barrels of oil only in Mannar. If we calculate it at USD 75 a barrel, it amounts to USD 150 billion. There are 9 trillion cubic meters of gas. If one cubic meter is calculated at USD 13 cents, we will receive USD 117 billion. This totals to USD 267 billion. If we share 50 per cent of this figure with the exploration companies, we will earn USD 133.5 billion through oil and gas. As you know, the government debt adds up to a total of USD 47 billion,” the minister explained, pointing out that this earning is more than enough to settle the country’s foreign debt burden.