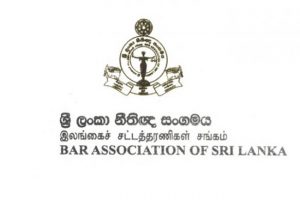 The Bar Association of Sri Lanka (BASL) says it is “deeply disturbed” at the reports of the alleged criminal conduct on the part of former State Minister of Prisons Management and Prisoners’ Rehabilitation Affairs Lohan Ratwatte.

In a statement issued on Thursday (Sep. 16), the BASL questioned the eligibility of Ratwatte to hold on office in the government any longer.

Following the breakout of the reports of his recent conduct at the Welikada and Anuradhapura prisons where he caused a commotion in drunken state, Ratwatte stepped down as the Prisons State Minister but he continues to serve as the State Minister of Gem and Jewellery-related Industries.

“The allegations against him are such that Mr. Ratwatte can no longer command the trust or responsibility of not only a government minister charged with duties in respect of prisons, but also as a minister holding any other portfolio and as a Member of Parliament.”

The BASL pointed out that such acts of impunity are ones which should be investigated fully and impartially and if proved be visited with penal consequences. “It is imperative that independent and impartial investigations into these alleged criminal acts are conducted expeditiously. The BASL has noted time and again that the State has a duty to protect prisoners in their custody.”

By tendering his resignation Ratwatte has accepted the responsibility for his conducts, the BASL said, adding that he has thereby forfeited his moral right to hold any office in government, ministerial or otherwise.

Further, the BASL called upon all relevant authorities including the Attorney General and the law enforcement authorities to act forthwith in dealing with these serious acts of impunity allegedly committed by Ratwatte. – ada derana