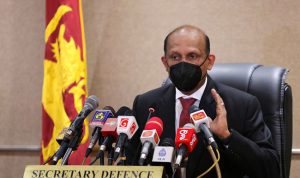 Sri Lanka’s Secretary of Defence says there is NO need for the public to panic over the ‘fake email’ received by country’s airport authorities regarding a security threat.

“Defence Secretary Gen. (Retd) Kamal Gunaratne Referring to the standard security measures adopted at the Katunayake Bandaranaike International Airport, affirmed that there is no requirement for general public to panic due to the information disseminating over a fake email of hostile nature received by the airport authorities.”

“Country’s defence and law enforcing agencies are continuing their duties in the same vein without letting anyone to disrupt the lasting peace,” the Ministry of Defence said.

Two suspects involved in placing a hand grenade in a private hospital in Colombo for an individual benefit was also taken into the custody and further investigations are carried out by the Police, the statement added.

Certain media reports yesterday claimed that security has been tightened at the BIA following a suspicious email warning of an impending attack. – ada derana