The State Minister of Co-operative Services, Marketing Development and Consumer Protection, Lasantha Alagiyawanna has accepted the letter of resignation tendered by Thushan Gunawardena, one of the three full-time members of the Consumer Affairs Authority (CAA). 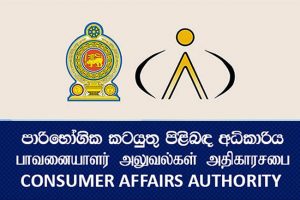 Although Mr. Gunawardena was referred to by media as the Executive Director and Director General of the CAA, no such positions exist in the CAA Act, the state ministry clarified in a press release issued on Tuesday (Sep. 21).

“However, he has served as full time member of the Authority in the recent past and Hon. Minister has thanked him service during his tenure and wished him well in his future endeavors,” it read further.

As Mr. Gunawardena has provided incorrect information to the media, State Minister Alagiyawanna expects to clarify the issue today at the Parliament during the debate of CAA (Amendment) Bill, the press release continued.

The second reading of the bill is scheduled to be taken up for debate during today’s session.

In addition, Regulations under the Fauna & Flora Protection Ordinance are scheduled to be approved post being taken up for debate.

During a meeting held on Sep. 17, Committee on Parliamentary Business decided to limit this week’s sittings of the House to Sep. 21 and 22.

Meanwhile, October 04 (Monday) has been declared a special sitting day for Questions for Oral Answers given the prevailing COVID-19 pandemic. – ada derana