Finance Minister Basil Rajapaksa and Sri Lanka Muslim Congress (SLMC) leader Rauff Hakeem have been appointed to the Parliament Select Committee to identify appropriate reforms of the election laws and the electoral system and to recommend necessary amendments. 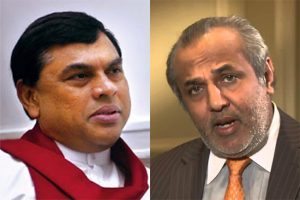 The committee, chaired by the Leader of the House, Minister of Education Dinesh Gunawardena, now consists of 17 members in total.