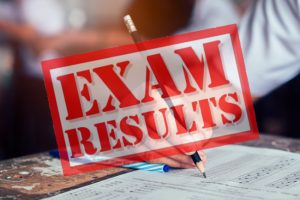 The results of 2020 G.C.E Ordinary Level Examination have been released, the Commissioner General of Examinations, Sanath Pujitha announced.

Exam results can be obtained from the official website of the Department of Examinations – www.doenets.lk.

However, the results of aesthetic subjects have not been finalized as the practical exams are yet to be conducted.

The Ordinary Level exam was initially scheduled to be held in December 2020. As a result of the COVID-19 pandemic, it was postponed several times until the date was finally fixed for March 01, 2021.

More than 622,300 candidates faced the Ordinary Level Examination at 4,513 centers set up island-wide. A total of 423,746 school candidates and 198,606 private candidates turned up for the exam this year.

Releasing the results of the exam was delayed due to the hold-up in the practical exams of aesthetic subjects.

The practical exams were initially slated to be in May, however, it was postponed to late August due to the ongoing pandemic situation. Later, the teacher-principal trade union action, which began in early July, interrupted the scheduling of the test. – ada derana