The Department of Meteorology says the showery condition over the south-western part of the country is expected to enhance due to active south-west monsoon condition.

Accordingly, showers or thundershowers will occur at times in Western, Sabaragamuwa, Central and North-western provinces and in Galle and Matara districts.

Heavy showers above 100 mm can be expected at some places in the aforementioned areas.

Showers or thundershowers will occur at a few places in the Eastern and Uva provinces in the evening or night.

Fairly strong winds up to (40-50) kmph can be expected in the Northern, North-central and North-western provinces as well as in Hambantota and Trincomalee districts.

The depression located over North Bay of Bengal lay centered near latitude 18.4N and longitude 90.4E. This system is very likely to intensify into a deep depression during next 12 hours.

Naval and fishing communities are advised not to venture into the sea areas around latitude 16.0N and 20.0N longitude 85.0E and 95.0E until further notice.

Winds will be south-westerly in direction. The wind speed will be (30-40) kmph in the sea areas around the island and it can increase up to (50-60) kmph at times in the sea areas extending from Puttalam to Pottuvil via Colombo, Galle and Hambantota.

Temporarily strong gusty winds and very rough seas can be expected during thundershowers. 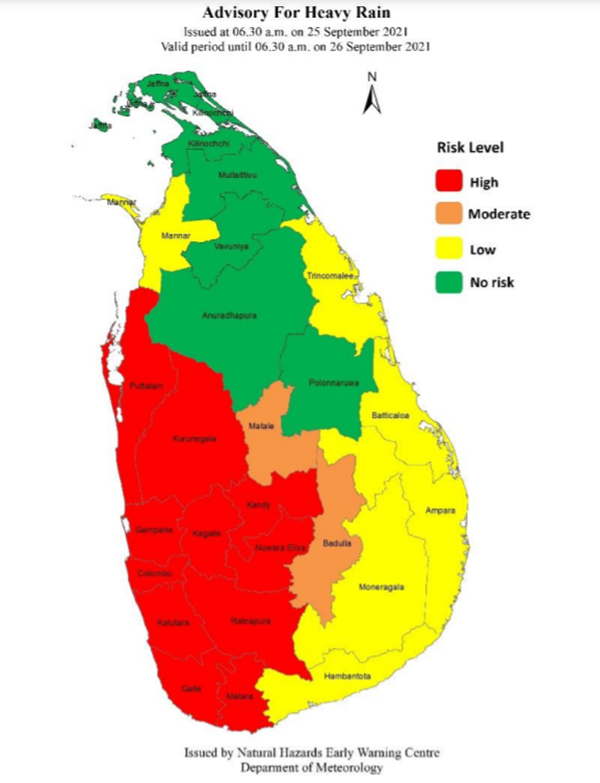