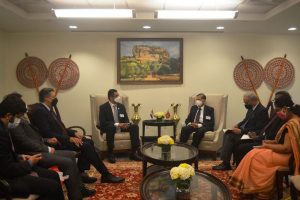 Sri Lankan Foreign Minister Prof. G.L. Peiris met the Minister of Industry and Advanced Technology of the United Arab Emirates (UAE) Dr. Sultan Al Jaber, on the sidelines of the 76th session of the United Nations General Assembly (UNGA) where both Ministers reaffirmed their commitment to further strengthen the good relationship between the countries based on mutual understanding and respect.

Minister Peiris recalled his longstanding friendship with the Foreign Minister of UAE Sheikh Abdullah Bin Zayed Al Nahyan and stated that he was looking forward to welcoming him to Sri Lanka soon.

Sri Lanka and the UAE have fruitful and constructive collaboration in the international fora including at the International Maritime Organization, the UN Human Rights Council and the UN Security Council.

Both Ministers agreed that it is not acceptable to impose on countries various conditions and agendas and that a one-size fits all policy does not deliver results, the Foreign Ministry said in a statement.

Minister Al Jaber stated that the one-size fits all policy is also not applicable to climate change, and it is necessary to define mechanisms that would allow countries to adapt and mitigate climate change without affecting their economies.

He stated that the UAE had put forward their nomination to host the United Nations Framework Convention on Climate Change (COP 28) in 2023 and looked forward to the support of Sri Lanka.

Approximately 300,000 Sri Lankans are living and working in the UAE. The Foreign Minister expressed appreciation of the Government of Sri Lanka for providing employment opportunities for Sri Lankans and for looking after their welfare, especially during the COVID-19 pandemic.

He also thanked the UAE Government for introducing constructive legislation related to the welfare of workers. Minister Peiris briefed Minister Al Jaber on the progress of the vaccination drive in Sri Lanka and, while appreciating the relaxation of visas, looked forward to its further expansion.

He also outlined the steps being taken by the Government to re-boost the tourism sector, specifically highlighting the ability to accommodate the specific priorities and requirements of visitors from the Gulf region.

Foreign Minister Peiris explained the challenges which Sri Lanka is currently experiencing with regard to its external budget, as a result of the COVID-19 pandemic. He focused in particular on the country’s requirement of oil, and requested concessionary arrangements from the UAE.

Minister Al Jaber, responding positively, said that the UAE would be happy to assist, and proposed the establishment of a strategic framework to take the process forward. Both sides agreed to follow-up rapidly. – ada derana