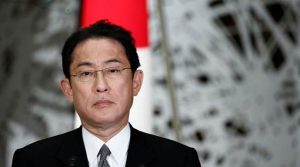 The soft-spoken centrist defeated popular vaccine chief Taro Kono in an unusually close race to succeed Prime Minister Yoshihide Suga, who decided to step down after just a year in office.

The 64-year-old will be confirmed as the new premier in a vote in parliament on October 4 and will then lead his party into general elections that must happen by November.

Kishida, the scion of a political family from Hiroshima, has long targeted the top job and ran unsuccessfully last year, losing out to Suga.

He became the first candidate to step into the race and ran on a platform of pandemic stimulus, touting himself as a listener who carried a suggestion box to events to receive proposals from citizens.

But the race was a tight one, with Kishida edging Kono by just a single vote in the first round of the voting of Liberal Democratic Party members and parliamentarians.

He had a convincing victory in the second round, taking 257 votes to Kono’s 170.

A former LDP policy chief, Kishida sought to capitalise on public discontent over Suga’s response to the pandemic, which has seen his government’s approval ratings slump to record lows.

His low-key persona has at times been described as a lack of charisma, and his policy ideas suggest more continuity than change.

But in the end, that appeared to win over more support from the LDP rank-and-file, who shied away from Kono’s reforming and direct style.

“Kishida has definitely performed way better than people expected him to,” said Corey Wallace, an assistant professor at Kanagawa University who focuses on Japanese politics.

“He was trying to be all things to all people. But compared to previous times he has run or indicated to run, he had a message,” he told AFP.

Kishida is seen as a safe pair of hands who is likely to broadly continue the policies of the Suga government, and has not signalled plans for any radical shifts on defence, foreign or economic policy.

He has called for a “politics of generosity” and said he wants to move away from the neo-liberal economic policies that have dominated in Japan.

Despite his liberal reputation however, Kishida was notably more reticent than his chief rival Kono on hot-button issues like legalising gay marriage or allowing married couples to have different surnames.

He faces an immediate roster of difficult issues, including steering a post-pandemic economic recovery and confronting threats from North Korea and China.

That era came to an end with Suga’s predecessor Shinzo Abe, who became Japan’s longest-serving prime minister. Abe stepped down due to health concerns after more than seven years in the job.