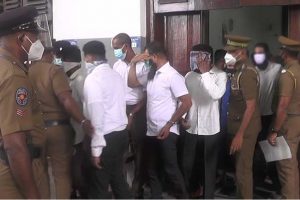 Hearings pertaining to the case are set to commence on November 23, 2021, the court decided when the case was taken up today (04).

The court issued summons on 25 defendants in the case who are in custody to appear before the court today.

However, only 24 of the defendants were produced before the court today as one of the suspects has been infected with Covid-19.

The charges against him are to be served on a later date, the Ada Derana reporter said.

A special three-member panel of judges were appointed last month to hear the case regarding the 2019 terror attacks in Sri Lanka.

The Chief Justice has appointed High Court Judges Damith Thotawatte, Amal Ranaraja and Navaratne Marasinghe to the three-member bench to hear the cases filed against the suspects in connection with the suicide bombings in which over 270 people, including foreign nationals, were killed.

The charges filed under the Prevention of Terrorism Act include conspiring to murder, aiding and abetting, collecting arms and ammunition, and attempted murder.

Nine suicide bombers, belonging to local Islamist extremist group National Thawheed Jamaat (NTJ) linked to ISIS, carried out a series of blasts that tore through three churches and as many luxury hotels in Sri Lanka, killing over 270 people and injuring more than 500 people on April 21, 2019.

The Attorney General’s Department has already filed two separate cases against the former Defence Secretary Hemasiri Fernando and former IGP Pujith Jayasundara, who are accused of criminal negligence of duties and failure to prevent the Easter Sunday attacks due to neglecting the prior intelligence input on the impending attacks.