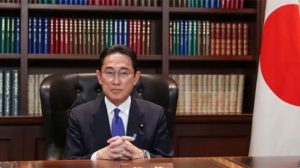 Fumio Kishida was officially elected as Japan’s 100th prime minister on Monday after winning a majority of votes in both houses of parliament.

The new cabinet members under Kishida, who succeeds Yoshihide Suga, are due to be announced later in the day.

Kishida was elected Japan’s prime minister in a parliamentary vote Monday and will be tasked with quickly tackling the pandemic and other domestic and global challenges and leading a national election within weeks.

With his party and its coalition partner holding a majority in both houses, Kishida won by a comfortable margin against Yukio Edano, head of the largest opposition Constitutional Democratic Party of Japan.

Kishida and his new Cabinet will be sworn in at a palace ceremony later in the day.

He replaces Yoshihide Suga, who resigned after only one year in office as his support plunged over his government’s handling of the pandemic and insistence on holding the Tokyo Olympics as the virus spread.

Kishida is expected to make his policy speech in Parliament on Friday but is looking to dissolve the lower house to hold elections on Oct. 31, Japanese media reported.

Observers see the early date as a move to take advantage of the fresh image of his party and Cabinet to rally support.

A former foreign minister, Kishida, 64, used to be known as a dovish moderate but turned hawkish apparently to win over influential conservatives in the Liberal Democratic Party.

He is firmly entrenched in the conservative establishment, and his victory in last week’s vote to replace Suga as the party’s leader was a choice for continuity and stability over change.

Kishida will replace all but two of 20 Cabinet posts under Suga and 13 are being appointed to ministerial posts for the first time, Japanese media reported.

Most of the posts went to powerful factions that voted for Kishida in the party election. Only three women are reportedly included, up from two in Suga’s government.