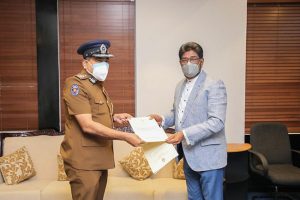 Former Police Spokesman Senior DIG Ajith Rohana has been appointed as a member of the National Authority on Tobacco & Alcohol (NATA).

He has been appointed to the position with immediate effect by Health Minister Keheliya Rambukwella and had received his letter of appointment from the latter at the Health Ministry premises today (05).

The appointment has been made in accordance with provisions under the National Authority on Tobacco & Alcohol Act No. 27 od 2006.

Ajith Rohana, who had previously served as the Police Media Spokesman, is the Senior DIG in charge of the Crimes and Traffic Range. – ada derana