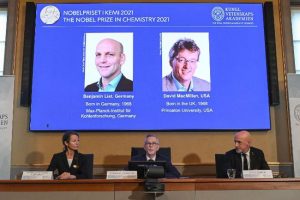 The Nobel Prize in chemistry has been awarded to Benjamin List and David W.C. MacMillan, two scientists honored for creating “an ingenious tool for building molecules” that has helped develop new drugs and made chemistry greener.

The pair were awarded the prize “for the development of asymmetric organocatalysis.” Their discoveries “initiated a totally new way of thinking for how to put together chemical molecules,” said Pernilla Wittung-Stafshede, a member of the chemistry Nobel committee.

“This new toolbox is used widely today, for example in drug discovery, and in fine chemicals production and is already benefiting humankind greatly,” Wittung-Stafshede added.

German scientist List and US-based Scottish chemist MacMillan worked independently of each other but share the prize, the third Nobel award to be handed out this week.

In 2000 the two researchers uncovered a third kind of catalyst — a substance which brings about a chemical reaction — called asymmetric organocatalysis. Scientists had previously believed that there were just two types of catalysts: metals and enzymes.

“This concept for catalysis is as simple as it is ingenious, and the fact is that many people have wondered why we didn’t think of it earlier,” said Johan Åqvist, chair of the Nobel Committee for Chemistry.

The new catalysts have been used in a number of ways in the past two decades, including for creating new pharmaceuticals and building molecules that capture light in solar cells. The committee credited them with “bringing the greatest benefit to humankind.”

“I hope I live up to this recognition and continue discovering amazing things,” List told reporters after being announced as a winner.

List said he was having a coffee with his wife when he got the call from the Nobel Committee. “Sweden appears on my phone, and I look at her, she looks at me and I run out of the coffee shop and, you know, that was amazing. It was very special,” he said.