Thirukumar Nadesan, the husband of former Minister Nirupama Rajapaksa, has requested President Gotabaya Rajapaksa to conduct an independent investigation into Pandora Papers – a series of financial documents that exposed the secret offshore wealth and dealings of hundreds of world leaders, politicians and billionaires.

This is one of the biggest leaks of financial documents that shed light on the secret wealth and dealings of world leaders, politicians and billionaires.

According to the leaked documents, Nirupama Rajapaksa and her husband Thirukumaran Nadesan are the actual economic beneficiaries of an offshore company, managed by a Singapore trust firm, used to purchase luxury residences in London and Sydney, Australia.

The anonymous real estate safe is still active in 2019 when the available documents stop, it stated.

In his letter to the President, Nadesan insisted that he and his wife are “totally innocent and are guilty of no wrongdoings.”

It is commonly believed that all persons whose names were divulged in some way guilty of wrongdoing, he said further.

“Several world leaders inclusive of His Excellency Imran Khan publicly announced that they will investigate anyone whose names appear in the Pandora Papers.”

Nadesan went on to request the President to appoint an independent investigator – preferably a retired appellate court judge – to investigate the matter without delay, “so that my name and that of my wife would be cleared.” 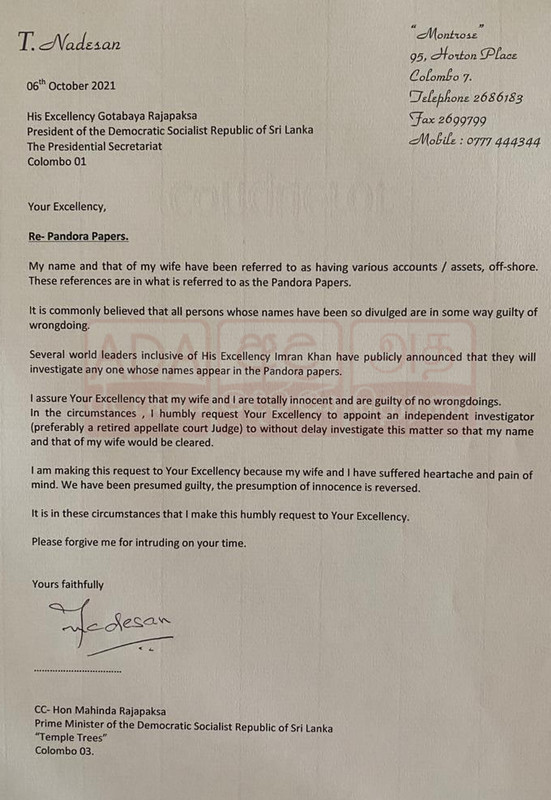