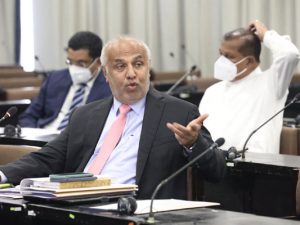 The Sri Lanka Muslim Congress (SLMC) made representations before the Select Committee of Parliament to Identify Appropriate Reforms of the Election Laws and the Electoral System and to Recommend Necessary Amendments that the proportional representation system is appropriate for the country.

The party yesterday (07) pointed out that the proportional representation system could ensure fair representation of the people and that people’s vote would add value under this system.

The Parliamentary Select Committee met under the chairmanship of Leader of the House, Minister Dinesh Gunawardena.

They also stressed that the new amendment should provide representation, based on the geographical boundaries of the island. The people are able to elect their representatives through the preferential voting system. The party also raised the need to make the ballot paper easy for the people to understand. They also said that the stability of the electoral system is an essential factor.

The party members informed the Committee that the SLMC was of the view that new amendments should be made to the current system without changing the proportional representation system.

MP, Dr. (Ms) Harini Amarasuriya, pointed out in the committee the need to take action to ensure the women’s representation. She also suggested that 50 percent of the national list should be women.