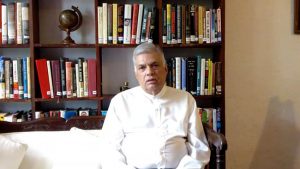 Former Prime Minister Ranil Wickremesinghe today called on the government to abolish the 20th Amendment to the Constitution, which he says even the president has conceded is not successful, and to continue under the 19th Amendment.

The UNP leader stated that today’s newspapers have reported an important matter that when he met with the ministers, the President had accepted that his political experience is limited and that therefore the Prime Minister should come forward to work collectively together with the other experienced cabinet ministers.

Wickremesinghe said this is a “good statement” because the President has accepted that the 20th Amendment to the Constitution is unsuccessful.

He said that the Cabinet system of government was eliminated as a result of that constitutional amendment and that for the economy and Covid-19, a government was existing within the government due to this.

At the same time, there was a government outside of the government for the price of rice, he charged.

“What was the result of that? The home economy was completely gone. The home expectation collapsed,” he said, adding that therefore this system has been unsuccessful and unfruitful.

Therefore, it is better to go for a traditional Cabinet governance as the President has stated, Wickremesinghe pointed out.

He said that even the President and the Parliament was elected under the 19th Amendment and that implementing this system would ensure that the Cabinet is responsible to the Parliament, which was divided b the 20th amendment.  – ada derana