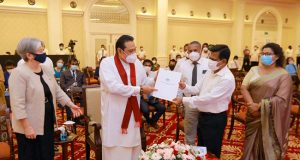 The Memorandum of Understanding (MoU) on MEPA – training institute aiming to educate young people on maritime employment opportunities – was exchanged with Ocean University and the University of Peradeniya and the Prime Minister unveiled its official logo.

Acting Australian High Commissioner to Sri Lanka Ms Amanda Jowell and United Nations Resident Representative Mr. Robert Juhkam handed over to the Prime Minister, the Maritime Safety Equipment donated by the Government of Australia and the United Nations for the protection of Sri Lanka’s maritime zones.