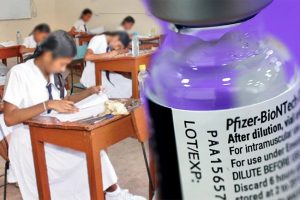 The pilot project to administer the Pfizer vaccine to the students sitting for the G.C.E. Advanced Level examination this year within the Colombo District will kick off today (October 15).

Accordingly, the students who are sitting the Advanced Level examination for the first time and second time this year will be vaccinated within all educational zones in the district.

The Education Ministry and the Health Ministry have planned to provide students in the age group of 18 – 19 with the first dose of the Pfizer vaccine at schools on October 21. As its pilot project, the programme commences this morning from the Colombo District.

Students have been instructed to participate in the vaccination programme with their identity cards.

Vaccinations will be available at the following locations in the Homagama, Colombo, Sri Jayewardenepura Kotte and Piliyandala education zones: