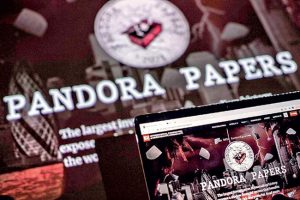 Transparency International Sri Lanka (TISL), as an organization that continues to raise awareness of the damaging effects of corruption, has once again drawn the attention of the general public to the serious concerns that were brought to light by the Pandora Papers and revealed to the public earlier this month.

The Pandora Papers exposé provides clear evidence of how the offshore industry promotes corruption and demonstrates the importance of ensuring the transparency of beneficial ownership of entities. Particularly on Sri Lanka, the Papers refer to extensive assets held offshore by former Deputy Minister of Water Supply and Drainage Ms. Nirupama Rajapaksa and her husband, Mr. Thirukumar Nadesan.

TISL in its initial statement following the revelations, called on the Sri Lankan authorities to ensure that independent investigations are carried out expeditiously into the revelations made by the Pandora Papers. Since then, the President has called on the Commission to Investigate Allegations of Bribery and Corruption (CIABOC) to investigate the claims made by Pandora Papers.

TISL says it has taken several steps since the initial statement, pertaining to the revelations made by the Pandora Papers.

One the 7th of October 2021, TISL filed a complaint with CIABOC, calling for an investigation into the alleged unexplained assets of the former Deputy Minister and her husband who haves been identified as Politically Exposed Persons (PEP).

TISL noted that the transactions revealed through this exposé could amount to offences under Section 23A of the Bribery Act, Section 4(1) of the CIABOC Act, and relevant provisions of the Declaration of Assets and Liabilities Law, and requested the Commission to probe into the Declarations of Assets and Liabilities of Mrs. Nirupama Rajapaksa relating to her tenure as a Member of Parliament.

TISL said it requested CIABOC to investigate whether public funds have been embezzled and laundered to these foreign safe heavens.

TISL has also written to the Financial Intelligence Unit (FIU) of the Central Bank of Sri Lanka on 13th October, calling on them to coordinate with relevant law enforcement authorities at both local and international level to investigate into potential money laundering allegedly committed by the former Member of Parliament and her spouse.

The FIU, as the central independent body established in terms of the provisions of the Financial Transactions Reporting Act No. 06 of 2006 (FTRA), is empowered to facilitate the prevention, detection, investigation and prosecution of offences related to money laundering and terrorist financing.

Through the letter TISL had requested the FIU to take further steps to furnish the authorities with evidence, examining the financial transactions that have flowed in and out of Sri Lanka by coordinating with local and foreign financial institutions, connected to these two individuals.

TISL has also filed three Right to Information Requests to the Elections Commission, Parliament of Sri Lanka and the Presidential Secretariat, calling for the Declarations of Assets and Liabilities of Ms. Nirupama Rajapaksa as an election candidate, member of parliament and Deputy Minister respectively

If the former Parliamentarian has not disclosed the overseas assets revealed through Pandora Papers, she will be in breach of the Declaration of Assets and Liabilities Law, TISL said. Therefore, her asset declarations would be a key tool to identify whether the overseas assets of the deputy minister, her spouse and children revealed through Pandora Papers have been disclosed at the time.

TISL Executive Director Nadishani Perera commenting on the matter stated “We urge the relevant authorities in the country to take immediate action to independently investigate the revelations made by Pandora Papers. It is important that the due process is followed without any interference, obstructions or delays. For the PEPs implicated, there remains a path to clearing their name, if they were to heed the call of the public by making the relevant asset declarations public. A thorough and impartial investigation will also bolster faith in the law enforcement agencies of the country and prove to be an important deterrent against perpetrators of white-collar crimes.”

The TISL Executive Director also noted that “while it is important to take stringent action to prevent foreign currency unlawfully flowing out of the country into secrecy jurisdictions, it is also imperative that countries like Sri Lanka take this issue up on a diplomatic level in order to ensure financial institutions in countries such as Singapore  are also held accountable and that steps are taken to recover any proceeds of crime back to our country from these asset destinations.”