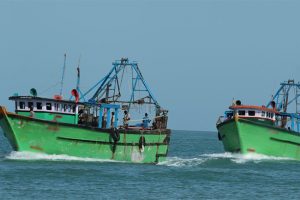 Tamil Nadu Chief Minister M.K. Stalin wrote to Prime Minister Narendra Modi on Friday urging his intervention to secure the release of 23 Indian fishermen from the state who were arrested by the Sri Lankan Navy and kept in custody in the island nation.

The fishermen who sailed into the high seas from Nagapattinam fishing harbour on October 13, were apprehended by the Sri Lankan Navy, when they were fishing in the “traditional fishing area” near Point Pedro. They were eventually taken to Karainagar naval base.

In his letter, Mr. Stalin condemned the action of the Sri Lankan Navy and further urged the Prime Minister to direct the Union External Affairs Ministry to take up the issue with Sri Lankan authorities so as to secure the release of these fishermen and their boats, an official release said.

“The Chief Minister noted that the recurring arrests and assault against fishermen by the Sri Lankan Navy was disturbing trend and he urged the Prime Minister to find ways to achieve a permanent solution to the issue,” it added.