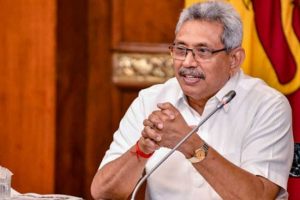 President Gotabaya Rajapaksa has rejected the request made by 11 allied parties of the government for a discussion on the agreement reached between the Sri Lankan government and US-based New Fortress Energy for latter’s investment in West Coast Power Limited (WCP) – the owner of 310 MW Yugadanavi Power Plant in Kerawalapitiya.

The opposition as well as ruling party members had expressed objections to the agreement which would reportedly handover a 40% stake in West Coast Power Limited to New Fortress Energy.

Accordingly, eleven political parties allied with the government had made a request to the President on September 21 seeking a discussion on the matter.

In their request, the parties had said that the agreement needs to be revisited and discussed and also that it should be implemented following proper tender procedure after a formal study.

However, President Rajapaksa has responded in writing to the representatives of those political parties stating that it would be more appropriate to discuss the matter in the Cabinet meeting or the ruling party meeting.

The letter also states that the Secretary to the Finance Ministry and CEB officials would be instructed to brief them on this.

Meanwhile the President has also states that if there is any issue with the political decisions of the Sri Lanka Podujana Peramuna (SLPP) they should take it up with either party leader PM Mahinda Rajapaksa or national organizer Minister Basil Rajapaksa, political sources told Ada Derana.

The leaders of the government’s allied parties are therefore expected to meet on October 23 to extensively discuss the issue.

The New Fortress Energy, in a statement, recently said it will acquire a 40% ownership stake in the WCP and plans to develop a new liquified natural gas (LNG) receiving, storage and regasification terminal located off the coast of Colombo. – ada derana