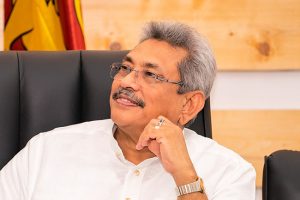 President Gotabaya Rajapaksa, in his message for Milad-un-Nabi, says the best way to pay special respect to Prophet Muhammad, who is highly revered by the Islam devotees in Sri Lanka and the world over, is to strive to further disseminate his vision to strengthen coexistence among the people.

“Today is the birth anniversary of the Prophet Muhammad, who showed to the world that benevolence and honesty are the two characteristics that needed for a person to be trusted by everyone.

“The profound religion the people believe in and accept has become the basis of the thinking and behavior of mankind in any society.”

He further stated that the life and philosophy of the Prophet Muhammad depict the rationale of the Islamic belief that God reveals himself to the people who are sincere, and that God exalts such persons to suitable and higher places.

It is most timely than ever before to apply the humanitarian philosophy of the Prophet Muhammad maintained throughout his life, towards social welfare today, the President added.

“May the lives of the Islam devotees around the world, including in Sri Lanka, who revere the exemplary life of the Prophet, be enlightened and prosperous!” – ada derana