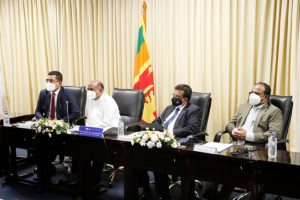 Expressing his gratitude for opening a resident diplomatic mission of New Zealand in Colombo, the Speaker pointed out that the bilateral relations between Sri Lanka and New Zealand, which were in existence for over 65 years, would be further expanded through this.

The Speaker expressed hopes to establish the Sri Lanka-New Zealand Parliamentary Friendship Association in the very near future in order to further strengthen bilateral relations between the Parliaments of two countries. Speaker Mahinda Yapa Abeywardena also invited a delegation from the New Zealand Parliament to visit Sri Lanka on a diplomatic visit.

The Speaker also commended the role of (Ms.) Vanushi Walters, who is of Sri Lankan origin and is currently a Member of Parliament for New Zealand. – ada derana