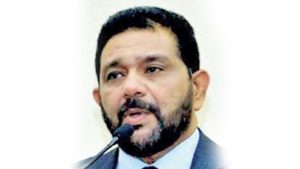 The former Western Province Governor Azath Salley who was incarcerated over the controversial statement he had made during a media briefing early this year has been further remanded until November 09.

During the proceedings, Salley’s attorney requested the magistrate to grant his incarcerated client permission to sign a document to sell a piece of land. Accordingly, the prison superintendent was directed to make necessary arrangements for the defendant to sign the relevant document while in prison.

When the leader of the National Unity Front (NUF) was produced before the Colombo High Court yesterday, he was served indictments filed by the Attorney General.

On March 16, Azath Salley was arrested by the CID and was detained under the provisions of the Prevention of Terrorism (PTA). The arrest was made over several controversial remarks Salley had made at a press conference, inciting strife among religious groups. – ada derana