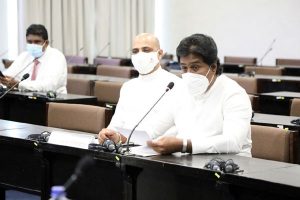 The National Freedom Front (NFF) testifying before the Parliamentary Select Committee on election reforms stated that it is better suited to follow the divisional system and the proportional system of 70% and 30% divisions respectively when electing people’s representatives at every election.

State Minister Jayantha Samaraweera said that it is very important to devolve maximum executive powers at the local government level and to provide for the establishment of ‘Janasabha’ at the divisional level.

The Minister stated the aforementioned at the Select Committee of Parliament to Identify Appropriate Reforms of the Election Laws and the Electoral System and to Recommend Necessary Amendments, held under the chairmanship of Leader of the House, Minister Dinesh Gunawardena.

The National Freedom Front, also known as Jathika Nidahas Peramuna (JNP), pointed out that it would be appropriate to delegate only the executive powers pertaining to the sovereignty of the people to those councils and thereby abolish the provincial council elections.

Provisions should be made for the withdrawal of the mandate given to a Member of the relevant division by a request signed by a two-thirds majority of the electorate in a Janasabha of a local government area as well for the purpose of holding by-elections.

They also suggested that the Elections Commissioner should be given a budget statement showing the amount of money expected to be spent at the election and how it will be spent.

Suspending the registration of parties with racist and religious nomenclature and providing for the renaming of existing parties, holding the Presidential and Parliamentary elections with two separate ballot papers simultaneously and holding those elections under a caretaker government, imposition of a time frame for elections by law for all elections such as for Presidential elections, Parliamentary elections and local government, not allowing political decisions to change such laws were among the proposals presented by the party at the Select Committee meeting.

The Jathika Hela Urumaya (JHU) also testified before the Parliamentary Select Committee. They emphasized that the number of single and proportional representation in the three levels of Parliament, Provincial Councils and Local Government should be 60:40 as a mixed representation.

The Jathika Hela Urumaya has proposed to hold provincial council and local government elections every four years at the same time of the year. The party pointed out in the committee that 25 percent representation of women in the candidate list should be ensured in every election and that proportional representation should be guaranteed to be one third.