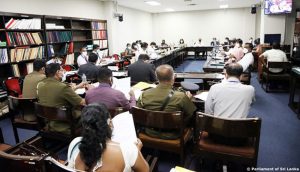 The Government has lost Rs. 27 billion in excise revenue this year due to the current COVID-19 situation, the Commissioner General of Excise Mr. M J. Gunasiri has revealed at the meeting of the Committee on Public Accounts (COPA).

The Commissioner General of Excise pointed out to the committee that although the expected revenue of the Excise Department this year is 160 billion rupees, it is difficult to achieve it in the current situation.

He stated the above at the COPA meeting held, under the Chairmanship of Prof. Tissa Vitarana, to inquire into the Auditor General’s Report for the year 2019 and the current performance of the Excise Department.

Although the Excise Department, the Customs Department and the Inland Revenue Department had made recommendations at a COPA Committee meeting in the year 2019 to set up a computer system that would be interconnected, the committee discussed at length that it had not yet been implemented.

While the Committee also emphasized the need to implement a computer software system to correct the process of calculating the Excise Revenue of the Department, attention was also drawn to the fact that the project has not been implemented properly despite the allocation made by the Budget and Supplements for the year 2016 to 2018.

The need for one particular institution for the purpose of regulating rehabilitation, training and socialization of drug addicts was also emphasized by the committee. The Chairman of the Committee stressed that the vacancies that have existed in the Department of Social Services for a long time should be filled expeditiously. Accordingly, the Committee pointed out the need to implement this project expeditiously by uniting all the institutions belonging to the Department.

Delays in the provision of safety stickers for liquor bottles and liquor related products and the delay in the development of a secure sticker management system were also discussed at this meeting to increase Government revenue.

Excise officials said that the process had been delayed due to factors such as the need to implement digital technology by major manufacturing companies and the prevailing COVID situation. The Chairman of the COPA Committee instructed the officials of the Excise Department to expedite this process.

State Minister Lasantha Alagiyawanna stated that the above projects should be expedited in order to obtain the proper revenue due to the Excise Department which is the third highest revenue earner for the Government. The Committee strongly emphasized the need to expedite the implementation of these recommendations made by the COPA Committee without further delay.