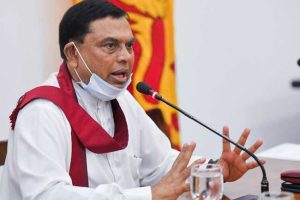 Finance Minister Basil Rajapaksa has briefed the government’s allied political parties on the agreement executed with the US-based New Fortress Energy Inc. on the Yugadanavi Power Plant in Kerawalapitiya.

A meeting of leaders and representatives of allied parties and several ministers was chaired by President Gotabaya Rajapaksa and Prime Minister Mahinda Rajapaksa at the Temple Trees yesterday. The discussion which commenced at around 5.30 p.m. went on for nearly four hours.

Speaking to the media later, Sri Lanka Freedom Party’s General Secretary, State Minister Dayasiri Jayasekara said the finance minister has informed them to submit suggestions of the government’s allied parties pertaining to the Yugadanavi power plant deal to him.

According to the finance minister, two more agreements are planned to be signed, Jayasekara said further.

Meanwhile, the Secretary of Sri Lanka Podujana Peramuna, Attorney-at-Law Sagara Kariyawasam said the issues that several representatives that regarding the transparency of the Yugadanavi power plant deal were resolved at the discussion.

The New Fortress Energy, in a recent statement, revealed that an agreement was executed with the Sri Lankan government for its investment in West Coast Power Limited (WCP) – the owner of 310 MW Yugadanavi Power Plant in Kerawalapitiya.

The firm said it will acquire a 40% ownership stake in the WCP and plans to develop a new liquefied natural gas (LNG) receiving, storage, and regasification terminal located off the coast of Colombo.

The leaders of allied parties had previously sought additional discussions regarding the power plant deal with President Gotabaya Rajapaksa. In their request, the representatives said the agreement needs to be revisited and discussed and also that it should be implemented following proper tender procedure after a formal study. – ada derana