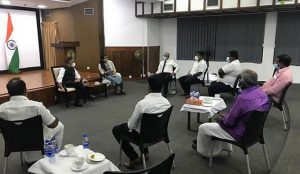 The Indian High Commissioner in Colombo on Monday assured Sri Lanka’s northern fishermen that he would convey their concerns over bottom trawling by Indian fishermen in the Palk Strait to both New Delhi and Tamil Nadu and look at some immediate measures to address the problem.

A delegation of fishermen leaders from Sri Lanka’s northern districts, along with Jaffna legislator M.A. Sumanthiran, met Indian High Commissioner Gopal Baglay in Colombo on Monday, and voiced concern over the “delay in India’s response” to the issue of bottom trawling in the Palk Strait, The Hindu reported.

The meeting was consequent to a recent discussion, held when High Commissioner Baglay called on Tamil National Alliance (TNA) leader R. Sampanthan last week, according to TNA spokesman Mr. Sumanthiran, who was also at the meeting. “The fisher community leaders recalled that the Indian side had agreed twice — in 2010 and 2016 — to phase out and end the practice of bottom trawling. But it has not ended yet,” the Jaffna MP told The Hindu, after Monday’s meeting.

A fortnight ago, northern Sri Lankan fishermen held a sea rally, demanding that Sri Lanka implement its laws against bottom trawling, a destructive fishing method that erodes the seabed, endangering marine organisms. Dozens of boats with black flags travelled 100 km from the north-eastern Mullaitivu town to Point Pedro in Jaffna, with some TNA MPs joining the protest. Fishermen from Tamil Nadu crossing the International Maritime Boundary Line (IMBL) and fishing in Sri Lankan waters, using the harmful bottom trawling fishing method, has been a recurring flashpoint in India-Sri Lanka ties.

“The High Commissioner listened to the fisher leaders’ grievances and told them that he would convey their sentiments to both New Delhi and Tamil Nadu. He agreed that while long term solutions are taking time, it is important to come up with some short-term measures meanwhile,” Mr. Sumanthiran was quoted as saying by The Hindu.