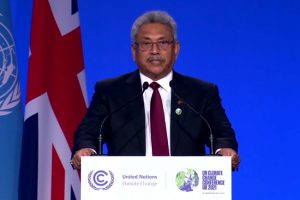 Sri Lanka is proud to be a co-lead of the “Global Energy Compact for No New Coal Power”, President Gotabaya Rajapaksa said addressing the World Leaders Summit – COP 26 held in Glasgow, Scotland, on Monday (November 01).

The COP26 – the UN Climate Change Conference held as “critical moment in the fight against climate change” is attended by around 25,000 people representing a wide range of fields, including Heads of State, government representatives, scholars and businessmen from 197 countries. It is reported that this is the largest conference ever held in the United Kingdom.

“It is essential that the world’s largest emitters of greenhouse gases fulfil their national commitments and assist developing nations navigate through the climate crisis,” the President said and called upon all nations to work together in a spirit of true cooperation to overcome this crisis and sustain humanity and our planet.

“Sri Lanka recently restricted the imports of chemical fertilizers, pesticides, and weedicides due to public health concerns, water contamination, soil degradation, and biodiversity impacts. Although opposed by entrenched lobbies, this has created opportunities for innovation and investment into organic agriculture that will be healthier and more sustainable in future”, the President pointed out.

“Sri Lanka is deeply aware of the impacts of climate change. Our rich philosophical heritage, shaped by Lord Buddha’s teachings, places great value on environmental integrity.” Accordingly, the President stressed that the sustainability is at the heart of our national policy framework.

“Sri Lanka’s updated Nationally Determined Contributions aims to reduce emissions towards achieving carbon neutrality by 2050. It is expected to increase carbon sequestration capacity by 7% by 2030 and steps are being taken to phase out use of fossil fuels,” the President said.

In 2019, Sri Lanka spearheaded the Colombo Declaration on Sustainable Nitrogen Management, which seeks to halve Nitrogen waste by 2030. “We look forward to more countries joining this initiative,” the President said.

Addressing the summit, US President Joe Biden said that climate change was already destroying the world, human lives and livelihoods. Apart from taking action to tackle issues of climate change internally, he said the US will do its part when it comes to helping the rest of the world to take action as well. “We want to do more to help the countries around the world, especially the developing countries accelerate their clean energy transition, address pollution and ensure the world that we must all share a cleaner, healthier and safer planet,” he said.

In his opening remarks to the summit, UK Prime Minister Boris Johnson said there was no excuse for failing to find solutions to climate change.

The Prime Minister pointed out that although some progress has been made in the past, there is still a great deal to be done for the environment. “If we fail to fulfill responsibilities properly today, the future generation will have to face the consequences,” he said.

Meanwhile, addressing the summit, UN Secretary General Antonio Guterres said that the earth was changing before our own eyes. The Secretary General pointed out that proper responsibilities should be fulfilled in this regard wisely and that those aspirations should be borne collectively.

Speaking at the opening ceremony, Prince Charles said that all must work together to find practical ways to overcome inequalities so that the planet can be saved and the younger community’s future which has been threatened will be secured.

COP:26 United Nations Conference on Climate Change, which commenced on October 31, will be held until November 12 in Glasgow. – ada derana