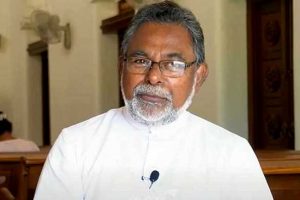 The fundamental rights petition filed by Rev. Fr. Cyril Gamini Fernando, seeking an injunction order preventing his arrest, will be taken up by the Supreme Court on Monday.

Rev. Fr. Fernando was summoned to the Criminal Investigation Department (CID) today to record a statement on the recent comments made by him during an online forum, for which a complaint has been filed by the Director of State Intelligence Service (SIS) Major General Suresh Sallay.

The complaint referred to comments made by Rev. Fr. Fernando, who is a member of the National Catholic Committee for Justice to Easter Sunday Attack Victims, alleging that the country’s intelligence units had provided financial and other assistance to Zahran Hashim, the leader of the National Thowheed Jamaath (NTJ) who was behind the suicide bombings.

The complaint states that it was also alleged, during the webinar, that the then-Brigadier Suresh Sallay had played an active role in nurturing Zahran Hashim and his followers.

However, despite being summoned, Rev. Fr. Fernando did not appear before the CID today, and informed the investigating officers that any future action regarding the summons issued to him will be taken pursuant to the Supreme Court orders.

Meanwhile, his legal counsels conveyed reasons for his absence to the officer in charge via a letter.

The attorneys stated that their client has already filed an FR petition with the Supreme Court over an imminent infringement of his fundamental rights guaranteed to him under Articles 12, 13(1) and 14(1)(a) of the Constitution. – ada derana