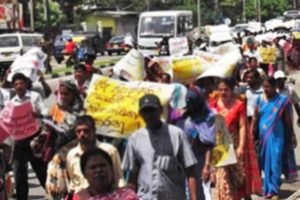 All teacher-principal trade unions are planning to stage a massive protest in Colombo on November 09, the Ceylon Teachers’ Union (CTU) says.

The general-secretary of the union, Joseph Stalin noted that they expect to kick off at the Lipton Roundabout at 2.00 p.m. next Tuesday with the participation of all trade union leaders.

Speaking further, Stalin added that the work-to-rule campaign launched by the teacher-principal trade unions will be continued.

Primary schools and primary sections of schools across the island were reopened with effect from October 25 following a six months closure due to the uptick in COVID-19 figures.

Teachers returned for in-person education, however, decided to launch a work-to-rule campaign in a bid to urge the authorities to resolve their salary issue.

Meanwhile, in-person education for students of grades 10, 11, 12 and 13 in all schools are scheduled to resume from November 08 (Monday). – ada derana