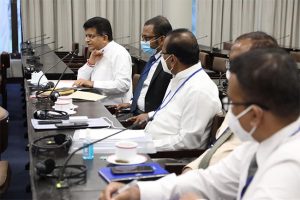 This was brought to attention at the meeting of Select Committee of Parliament to Identify Appropriate Reforms of the Election Laws and the Electoral System and to Recommend Necessary Amendments, chaired by the Leader of the House, Minister Dinesh Gunawardena on Monday (Nov.08).

Speaking further on behalf of the PHU, Minister Udaya Gammanpila said the ban on posters should be maintained during the campaign.

He also commented on the number of times a President should be elected and points to note regarding taking into consideration the delimiting of electorates.

In addition, delegates representing the Samajavadi Janatha Peramuna and the National Movement for a Just Society also presented their views and proposals to this Select Committee.

The Samajavadi Janatha Peramuna stated that in the forthcoming elections 60% of the representatives should be elected by the first past the post system and 40% by the proportional system. They were also of the view that attention should be paid to the minority parties.

The National Movement for a Just Society also presented its proposals on four principles. They also pointed out the importance of appointing 60% under the first past the post system and 40% under the proportional system.