The draft bill to extend the retirement age of private sector employees to 60 years, has been passed in Parliament with amendments. 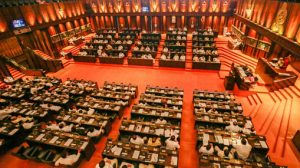 The Bill had been presented in parliament by the Minister of Labour on 22nd of October, 2021.

On Tuesday (09), the Minimum Retirement Age of Workers Bill had received the approval of the Ministerial Consultative Committee on Labour for the purpose of being presented to Parliament.

The Termination of Employment of Workmen (Special Provisions) (Amendment) Bill had also received the approval of the Committee, chaired by Minister Nimal Siripala de Silva.

The Bills are aimed at extending the retirement age of private sector employees to 60 years.

The Second Reading Debate pertaining to these Bills took place in Parliament today (11).

On March 23, 2021, the Cabinet granted the approval to prepare a bill to amend the existing minimum age limit for the retirement of private-sector employees.

The bill prepared accordingly was further discussed with the participation of all relevant parties in the Committee to Study on Policy and Legal Matters Affecting the Business Sector chaired by the Prime Minister.