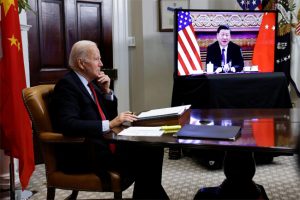 The highly anticipated meeting comes as tensions rise between the world’s two biggest economies on issues like Taiwan, trade and human rights.

Mr Biden said both countries had a responsibility to ensure their rivalry did not “veer into open conflict”.

This is the most substantial talks both leaders have had since Mr Biden took office in January.

Both men greeted each other warmly, with Mr Xi saying he was happy to see his “old friend” Biden.

For his part, Mr Biden said, “Maybe I should start more formally, although you and I have never been that formal with one another,” according to a Reuters report.

He added that both men had “always communicated with one another very honestly and candidly”, adding “we never walk away wondering what the other man is thinking”.

The competing nations surprised many last week by issuing a joint declaration to address climate change, at talks in Glasgow, Scotland.

“Humanity lives in a global village, and we face multiple challenges together. China and the U.S. need to increase communication and cooperation.” said Mr Xi.

Mr Biden added that they needed to establish some “common sense guardrails”…. “to ensure that our competition between our countries does not veer into conflict”.

“(We) believe – and you and I have talked about this – all countries have to play by the same rules of the road, and why the United States is always going to stand up for our interests and values and those of our allies and partners,” he said.

Mr Biden’s comments appear to be a nod to Taiwan – a point of growing contention between both countries.

Beijing views Taiwan as a breakaway province, but democratic Taiwan sees itself as a sovereign state.

The US has been increasingly vocal about its commitment to defending Taiwan.

Mr Biden said last month that the US would defend Taiwan if China attacked, in an apparent departure from a long-held US foreign policy position of “strategic ambiguity” which has seen Washington being deliberately vague about what it would actually do.

Issues like cybersecurity, trade and nuclear non-proliferation are also subjects on the table.

In a statement released on Friday, the White House said “the two leaders will discuss ways to responsibly manage the competition between the United States and the PRC, as well as ways to work together where our interests align”.

This is the third time the two leaders have spoken since Mr Biden’s inauguration in January. The meeting is expected to last several hours.

Mr Xi has not left China in nearly two years, since the outbreak of the Covid-19 pandemic.

The China-US relationship is crucial to both sides and the wider world, with Beijing repeatedly having called on the new administration in Washington to improve relations which deteriorated under Mr Biden’s predecessor, Donald Trump.