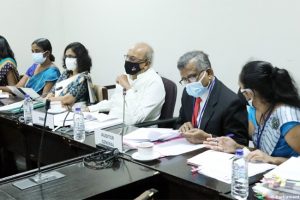 The COPA disclosed that foreign direct financial aid has been spent on four projects without informing the External Resources Department of the General Treasury.

The revelation came as officials of the Ministry of Environment were summoned to the Committee on Public Accounts to examine the Auditor General’s report for the financial years 2017, 2018 and 2019 and their current performance.

The Committee on Public Accounts was held in Parliament yesterday (Nov. 19) under the chairmanship of Prof. Tissa Vitarana, Member of Parliament.

It was identified that three projects worth USD 9.96 million and one project worth Euro 1.86 million were being implemented with such direct financial assistance without notifying the Department of External Resources. Hence, the COPA instructed the officials to inform the Treasury when receiving and spending such assistance in the future.

Furthermore, COPA emphasized that the attention paid to the pollution caused by the mixing of chemical wastes and hazardous wastes by government hospitals is at a minimum. The officials present at the Committee meeting stated that a systematic program has been initiated in this regard.

In addition, discussions were also held on how systematic electronic waste management should be carried out, as well as regarding the compensation payments on land acquired by the government for the development of the Uma Oya Multipurpose Project, and the current status of the Surakimu Ganga National Environmental Program.