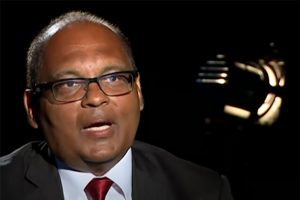 There was no ‘political conspiracy’ behind the 2019 Easter Sunday terror attacks, says Prof. Rohan Gunaratna, an international terrorism expert.

The remarks of the Head of the International Centre for Political Violence and Terrorism Research (ICPVTR) at Nanyang Technological University in Singapore came during a recent interview with the ‘Talk with Chatura’ program.

Prof. Gunaratna explained that the video recorded by the ringleader of the attacks, Zahran Hashim and the other suicide bombers of themselves taking a pledge of allegiance prior to the carnage proves that there was no political conspiracy.

When looking into the video, it is understood that that the ideology of the terrorists had moved from fundamentalism to extremism and then from extremism to terrorism, Prof. Gunaratna added. “In this video, Zahran explains why they attacked the churches. This was an onslaught carried out based on extremism. Nobody can now say a conspiracy was behind the attacks because now we have evidence. This video is the best proof.” – ada derana