Sri Lanka Navy launched a dedicated rescue mission this morning (November 23) to locate the individuals who went missing in the ferry accident near Kuringankerni Bridge in Kinniya, Trincomalee. 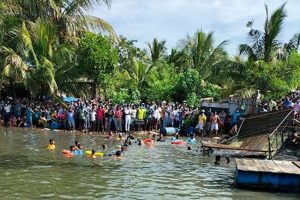 The ferry had been used by residents in the area due to the construction of the existing Kuringankerni Bridge.

As of now, six dead bodies have been recovered by rescue teams. Among the deceased are four schoolchildren. Meanwhile, 12 persons have been hospitalized after being rescued.

The Navy is continuing a search operation in the area further. – ada derana