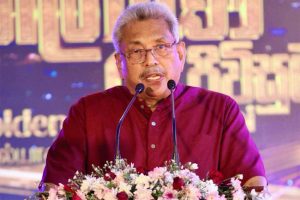 President Gotabaya Rajapaksa says law can be enforced against the culprits revealed by the Presidential Commission of Inquiry (PCoI) into the Easter Sunday attacks through an Act of Parliament.

The Head of State made this remark addressing the ceremony held to declare open the “Golden Gate Kalyani,” constructed with state-of-the-art technology, on Wednesday evening (Nov. 24).

The relevant PCoI appointed by the former government has made recommendations that the then-administration, including the former President, Prime Minister and the Cabinet of Ministers should be held responsible for the attack, the President said further. It has been referred to the Parliament, the Attorney General, and the Criminal Investigation Department to take further actions.

The government holds the two-thirds majority required for this purpose, the President noted, urging the Opposition to be mindful when making demands and not to deceive the people.

Following the opening of the New Kelani Bridge, the Head of State, along with Prime Minister Mahinda Rajapaksa, activated the state-of-the-art lighting system set up at both sides of the bridge.

The new bridge was constructed to mitigate and ease the traffic congestion on the Kelani Bridge as a result of vehicles entering and leaving Colombo.

The Government of Sri Lanka and the Japan International Cooperation Agency (JICA) prepared the initial plans for the bridge in 2012 and its feasibility study was conducted in 2013. The Cabinet approved the construction of the bridge in 2014. The relevant agreements were also signed in the same year.

The Bridge consists of six lanes from the entrance of the Colombo-Katunayake Expressway towards the Bandaranaike Roundabout and from that point onwards, the flyover will be four lanes towards Orugodawatte and the Ingurukade Junction. This will enable access to the elevated expressways from Ingurukade Junction to the Colombo Port City and from Orugodawatta to Athurugiriya.

It is significant that the bridge has been constructed in such a way that it does not obstruct the flow of the Kelani River and that many species of plants including Koboneela, Esala, May -Mara, Mee and Kumbuk have been planted on both sides of the main road to protect the beauty of the environment.

During the tenure of President Mahinda Rajapaksa from 2005 to 2010, a massive development took place in the country. The President assured that sustainable solutions will be provided for all other issues as well.

Despite the Covid-19 pandemic, a number of infrastructure development projects have been initiated. While stating that all these activities will continue, President Rajapaksa said that all the promised projects will be completed if there are no other lockdowns in the country in the future.

“Intelligent people should always be on the alert. Do not leave any room for lies,” Highways Minister Johnston Fernando said, adding that the Opposition should not be allowed to sabotage the development program being carried out by the government in the face of the Covid-19 challenge.

Back then, President Mahinda Rajapaksa made all the plans to build the Kinniya Bridge, the Highways Minister added. He also expressed regret over the tragedy caused by the previous government’s negligence to implement the project. He pointed out that precious lives could have been saved if the project had been implemented.

The ‘Golden Gate Kalyani’ is another symbol of Japan-Sri Lanka friendship. Japanese Ambassador to Sri Lanka Mizukoshi Hideaki stated that Japan will continue to provide assistance to Sri Lanka.