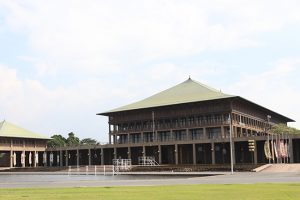 The appointment of 08 Secretaries to Ministries has been approved by the Committee on High Posts, the Communications Department of Parliament said in a statement.

General (Retd.) Kamal Gunaratne, Secretary to the Ministry of Defense was among the Secretaries to the Ministries who received approval of the Committee on High Posts chaired by Speaker of Parliament Mahinda Yapa Abeywardena, yesterday (Nov. 23).

The Committee on High Posts also granted its approval for the appointments of Mr. M.N. Ranasinghe as State Secretary to the State Ministry of Promoting the Production and Regulating the Supply of Organic Fertilizer, and Paddy and Grains, Organic Food, Vegetables, Fruits, Chilies, Onion and Potato Cultivation Promoting, Seed Production and Advanced Technology, Agriculture.

The Committee also gave the nod to the appointment of Mr. Sirimal Perera as the Secretary to the State Ministry of Urban Development, Waste Disposal and Community cleanliness.