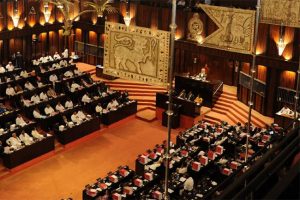 According to the main opposition’s general secretary, MP Ranjith Madduma Bandara, the relevant decision had been taken at a discussion held with the Speaker of the House.

SJB legislators also staged a protest yesterday near the Parliament premises, stressing that they would boycott parliamentary sessions. They alleged the ruling party MPs of acts of violence and refused to enter the Chambers until the safety of opposition members is assured.

Wearing black armbands and scarves, they held placards with slogans criticizing the government and members of the Sri Lanka Podujana Peramuna (SLPP) over their behaviour in the House.

A heated debate ensued in the House on Dec. 03 and 04 with regard to SJB MP Manusha Nanayakkara not being given five minutes to address the parliamentary session on Friday.

The opposition alleged the lawmakers of the ruling party of approaching MP Nanayakkara and attempted to assault him on two occasions.

Addressing the House on Dec. 04, Chief Opposition Whip, MP Lakshman Kiriella stressed that the opposition members would not attend the parliamentary sittings if their safety is not ensured. – ada derana