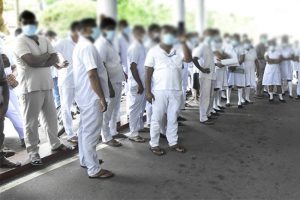 The trade union action, based on salary anomalies and six other issues in their services, was initiated in the North-Western Province yesterday.

The chief of the Federation of Health Professionals Ravi Kumudesh said they expect to expand their trade union action to other provinces in the coming days.

The token strike launched in the North-Western Province was ended at 7.00 am today, according to Kumudesh.

He said they have been trying to resolve the issues through discussions for nearly two months now but to no avail.

“We will carry out token strikes in all provinces this month and resort to a continuous strike action eventually,” the federation chief noted. – ada derana